July was a whirlwind, participating at Inspirefest's Fringe Festival, the family-friendly coding session and GameCraft UnPlugged went down a treat. And being with fellow Pythonistas at EuroPython was a blast.

EuroPython was a blast, I haven't been in a few years, and it was great to meet new and old faces, and enjoyed the education track a lot, jaw dropped from Jameson about his research project on something called the gravitational waves. 😉

#StickerSwap this week at #europython, anyone? Stop me even if you don't have stickers to swap anyway. 😁❤️😎😊 pic.twitter.com/oFHOjIJY4i

And I even did a sticker swap with the awesome Lynn Root at EuroPython.

Met @roguelynn and swapped @codinggrace stickers for #pyladies stickers. Anyone else for a sticker swap? pic.twitter.com/jyIDsGgg2r

Met PyLadies at an impromptu PyLadies lunch myself and Lynn hastily organised and defended with all our might the chairs from the masses eyeing for free chairs.

@pyladies lunch was a success. Great to talk to some of you! Loads more #pyladies stickers left. #EuroPython pic.twitter.com/hiLwkhLGTP

And I even got a free Microbit, which is fantastic, thanks to BBC and Nicholas, who is demonstrating a robot with the microbit walking (which incidentally won the tweet of the day at EuroPython, no prize).

And that's me with the free Microbit (pic by Mick Twomey), and see, I'm wearing my Python Ireland t-shirt. 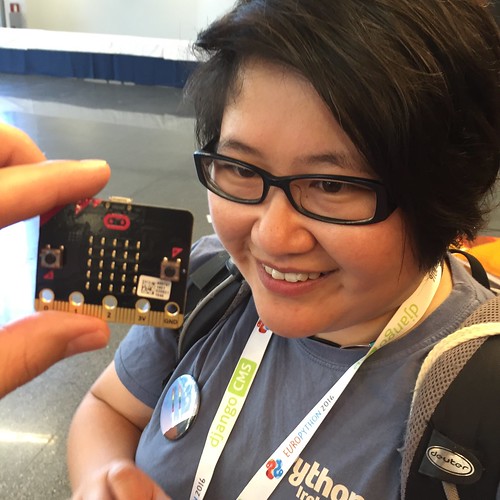 If you are curious about the talks from EuroPython this year, they have been uploading their videos of the talks at europython.tv.