It was a wet, or so the Irish would say, a soft morning. Mick and I (Vicky) arrived at DCU and found the venue. Everyone was setting up. It might be 10AM but there's a buzz in the air.

After hectic but great work week how cool that @CodingGrace is leading the charge @coderdojogirls this morning pic.twitter.com/y0wycw34bZ

Here are the two videos of Grace Hopper I mentioned during the introduction about Coding Grace:

Once we settled down, and was introduced by Niambh, we got started setting folks machines up, it was mostly Windows and we do have a few Macs.

One of the few things we had to do was make sure everyone had Python on their laptops, Sublime Text Editor installed and the workshop content copied over and unzipped.

For Mac and Linux users, Python is on by default. To check if it works

For those on Windows, this is what we did to set the environment settings, this makes life a lot easier when we start using CMD:

To find out if it's set up properly, we need to open Command Prompt.

A couple of things to do after installing Sublime Text editor. 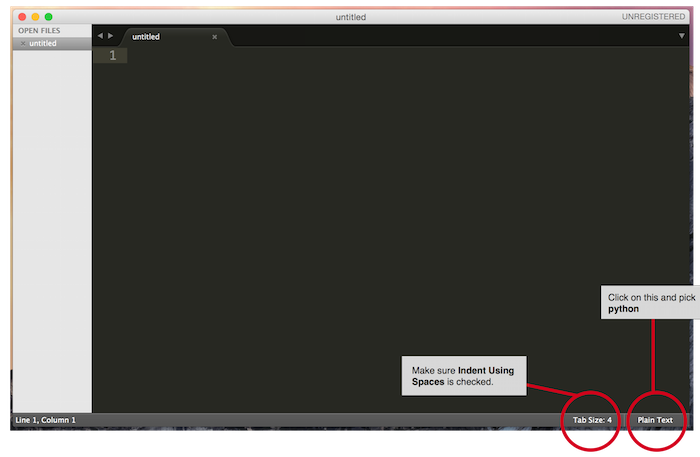 Before we start using Sublime Text Editor, make sure you have the following set so Python-related code gets highlighted (easy to look at at, and makes it nice to use), and that we have the indentation set properly. The latter is important as part of the best programming practices in Python (see PEP8).

There were 3 command line commands that was useful to know when navigating in the CMD (Windows)/Terminal (MacOSX/Linux).

NOTE: One thing I didn't mention why command line is useful to learn, when you run a Python script, if there are any errors, you can see it right away in the CMD/Terminal. On Windows, if you run by double-clicking on the Python script, if there's an error, it will just close without a way for you to see what went wrong.

This shows where Python starts executing the code, in this case, on line 5 as if encounters if __name__ == '__main__'. Otherwise it will execute everything from line 1 onwards.

This script also contains a function, starts with def followed by the name of your function followed by :.

On the next line, it's 4 spaces (tab but make sure your editor has set "Indent to 4 spaces"), and your code.

To run this script via command line:

Here, I am introducing some interactiveness and the beginnings of a game. It will ask for your name and it will print it out.

Grand so far, now for some editing of game_02.py.

Now we have a variable (a way for the computer to store information like strings and numbers).

player_name is a variable and when you type your name and hit ⏎, whatever you types will be stored in player_name.

If you run the game_02.py, it seems that nothing is happening, but it has stored your name after you entered it, but that's all it's doing. To see what player_name stored, we will print it out.

This looks funny, but what it is doing is telling Python that when it sees anything between and opening and closing ", it is a string.

And in that string, if it sees {}, then it is replaced with something such as a string from a variable called player_name in this case.

For those on Python 2.6.x, we encountered an error when running game_02.py.

If you come across errors:

Regarding the zero length field name error, we realised it was the version of Python encountering {} in string formatting. In 2.7 (onwards), using {} is fine. If using Python 2.6.x, substitute {} with {0} and it should work now.

But sadly time flew fast and the workshop has to come to an end. It was a wonderful morning, so much enthusiasm and fun.

Big thanks to Niambh and CoderDojoGirls@DCU for inviting Mick and myself as Coding Grace.

Our website for more information of upcoming events is codinggrace.com.